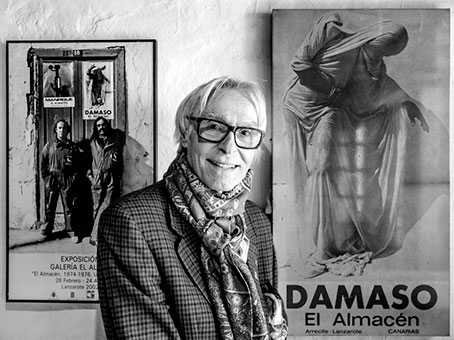 Pepe Dámaso, an artist born in Gran Canaria in 1933, a good friend of Cesar Manrique’s, on Monday 15th May was reunited with his past and El Almacén (The Warehouse), a mythical cultural center in Arrecife which Manrique himself created in 1973.

On 22nd February 1974 it opened its doors to the public as a “polidimensional center” conceived for developing contemporary culture in its multiple facets. At that time a creative team made up of Luis Ibañez, Pepe Dámaso, Gerardo Fontes and Manrique took on the project. After being closed for many years, El Almacén reopened its doors last year recovering its rightful place as an indispensable muti-discipline cultural center in the capital of Lanzarote.

In this reunion, a moved Pepe Dámaso told stories about his beginnings in Madrid, when he dared at the tender age of 19 to approach an already well-known Cesar Manrique at one of his exhibitions, giving birth that day to a complicity which was to last until the death of the Lanzarotean artist. He reminisced affectionately about his own exhibition “without paintings”, due to problems with customs between the Islands and the Mainland. He decided to inaugurate the exhibition without the paintings as an artistic act and went on to say that people went to the exhibition anyway to eat the hors d’oeuvres, “which is why people go to art exhibitions” he added with irony.

He reflected on art, became emotional with the attendees and spoke very highly and affectionately of his friend Cesar Manrique. He stated that “the best decision in his life was to stay in the Islands” to develop his personal and artistic life. He has bequeathed all of his works to the people of the Islands through the Canarian government and we will soon have the pleasure of being able to take them in at the Centro Atlántico de Arte Moderno de Las Palmas de Gran Canaria.

Thank you Pepe Dámaso for so much intelligence, culture, art, affection and meaningful stories. It was a luxury to hear him in this mythical place!