Discover the south of Lanzarote with us

In the south of the island you will be surprised by the lunar landscape of Timanfaya National Park, the ingenuity of farmers in the wine region of La Geria and the impressive lava coast and its salt mines. 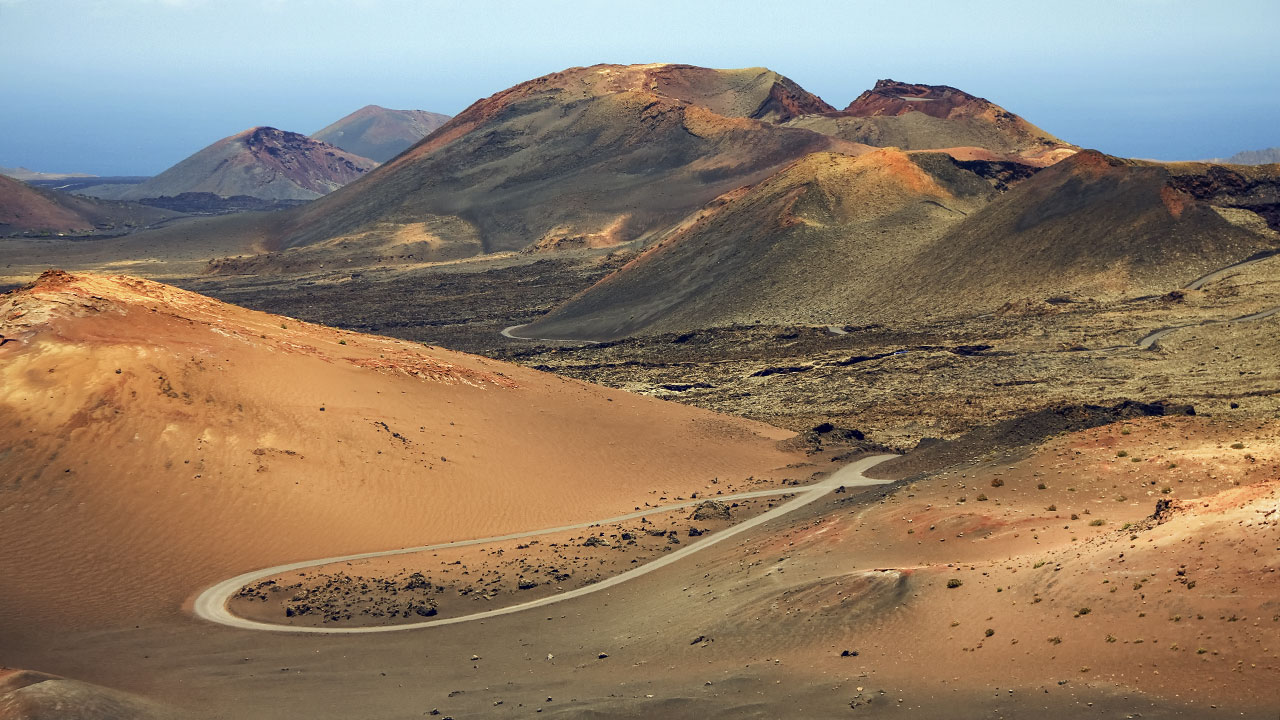 It covers an area of 51 km2. It is unique for its geological and volcanological features. It is a place not to be missed if you come to Lanzarote! 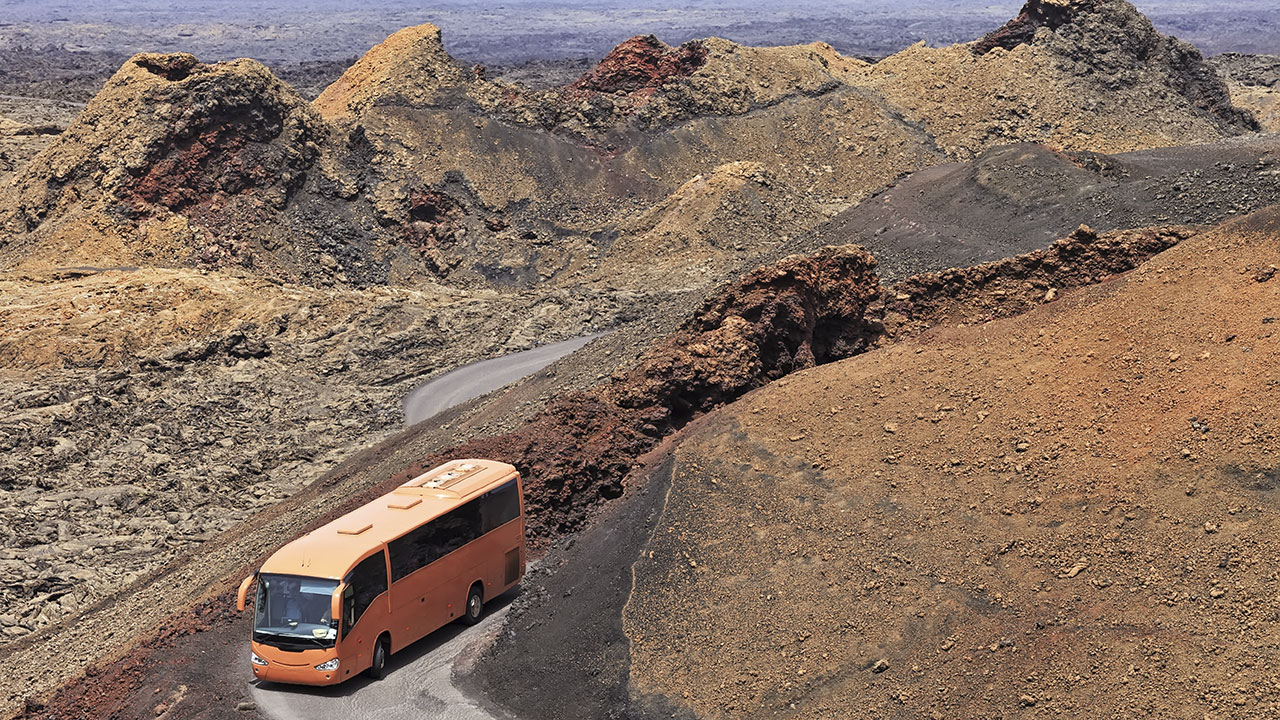 The most spectacular scenery that one can discover in Lanzarote is located within Timanfaya National Park: The Fire Mountains, caused by volcanic eruptions in the eighteenth and nineteenth centuries, look as if they had been created yesterday.

On Hilario´s Islet you can still feel the heat emanating from one of the volcanoes through some demonstrations. The restaurant "El Diablo" is situated here with a grill which uses the heat of the volcano for cooking. The building designed by Cesar Manrique is built to withstand high temperatures and is perfectly integrated into the environment.

Lunar route (Volcano route): This route, which can only be done by coach, will allow you to discover the exciting history of these eruptions that created this landscape and is guaranteed to leave you stunned. 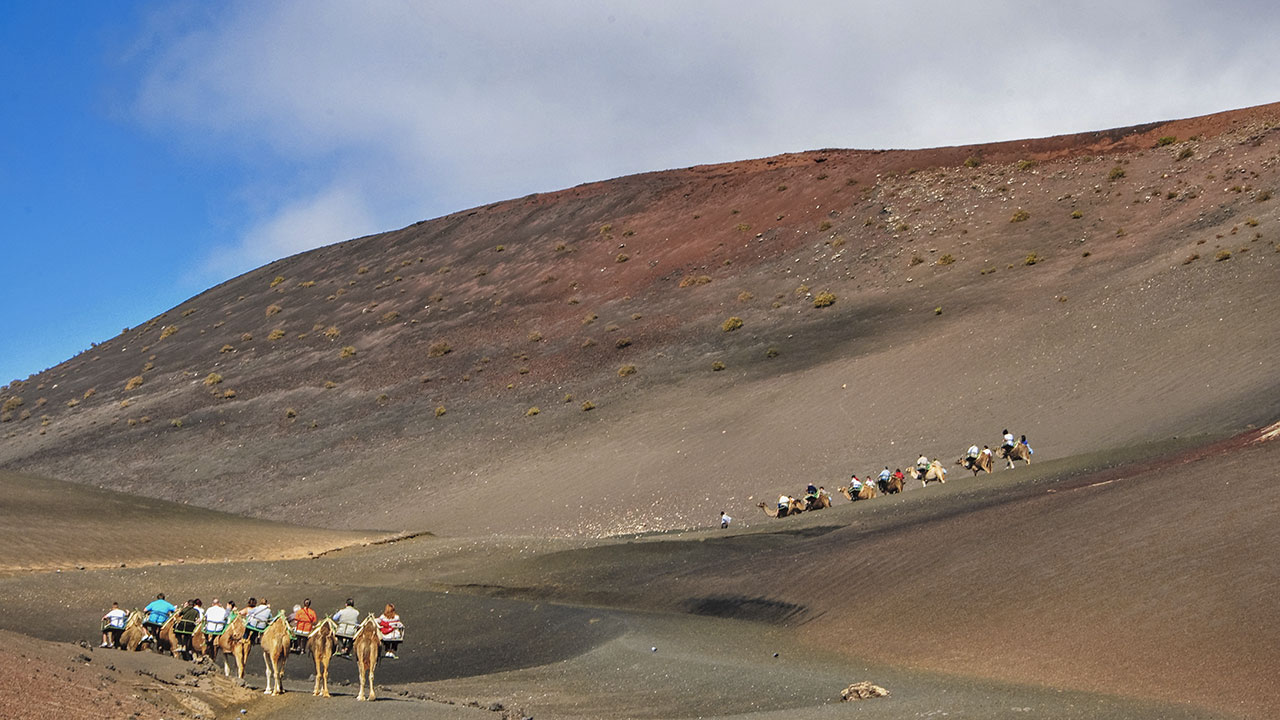 Just past the imaginary boundary line of the National Park, on the left, are the so called camels which are actually dromedaries. Do not forget that we are geographically in Africa, so don´t be surprised and don´t leave the island without a ride on an animal so prepared to survive the extreme weather of Africa.

These animals were indispensable for tilling the farmland and used as a means of transport into the 70’s. 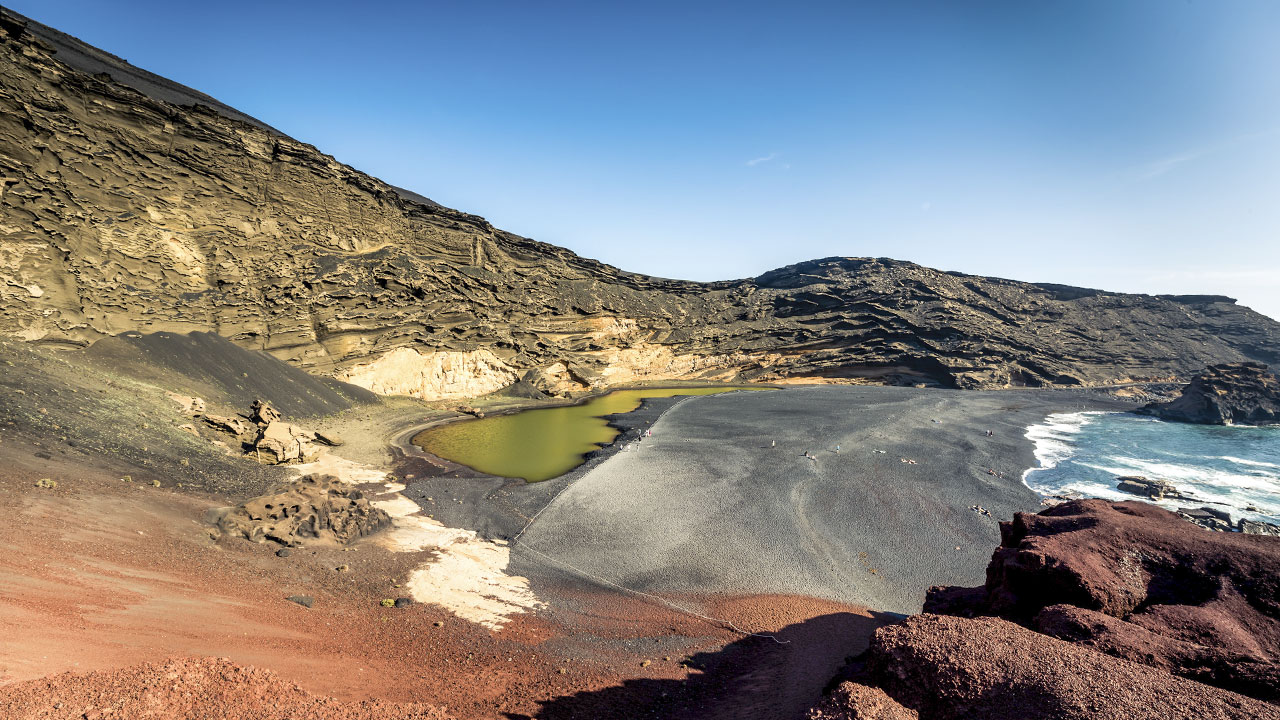 This is a small fishing village known for its fresh fish restaurants but especially for its small green lagoon formed in the crater and for its sinuous shapes and beautiful contrasts.

This landscape has been chosen as the setting for numerous films including "Broken Embraces" by the Spanish director Pedro Almodóvar, “In the Heart of the Sea” by director Ron Howard,  “One Million B.C.” by Don Chaffey. 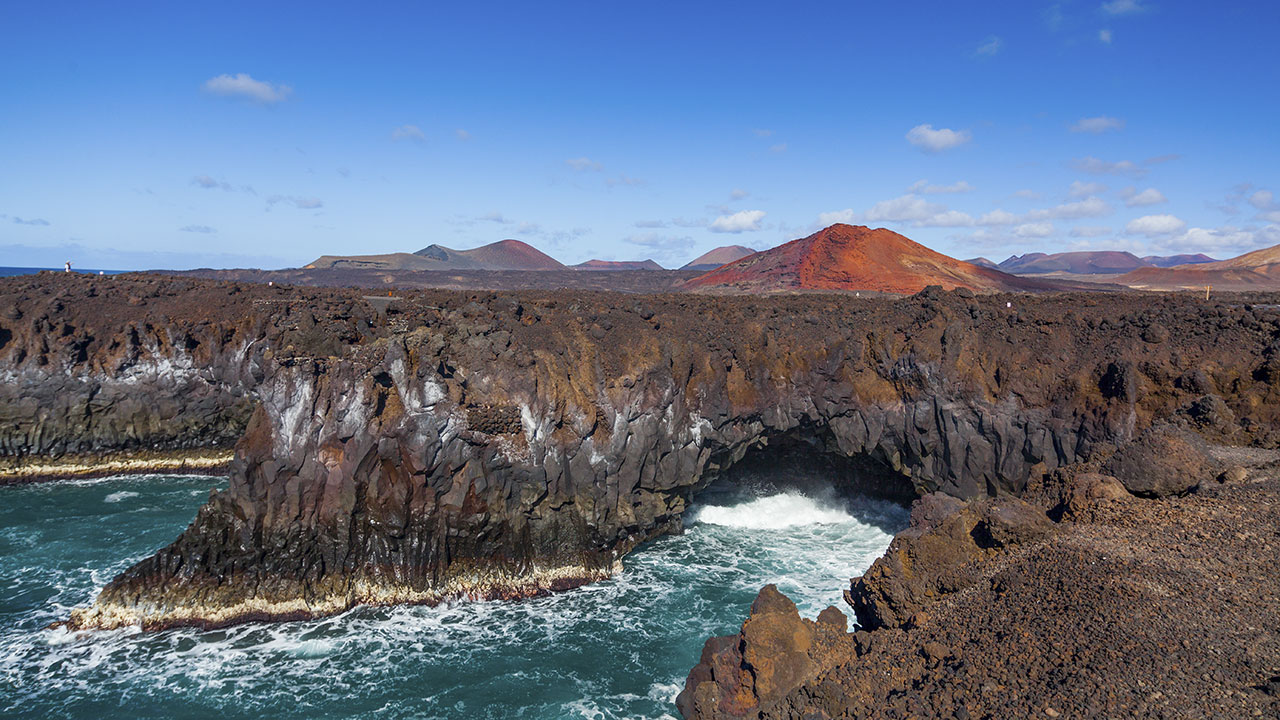 The most recently formed lava coast of the island. The lava eruptions of the eighteenth century went into the sea enlarging the surface of the island and giving rise to a rough coastline dotted with caves.

On this side of the island there is usually a heavy swell that makes it look like the sea is boiling and hence its name: Los Hervideros. For the enjoyment of visitors a path has been built inviting you to take a stroll to watch the surf and blowholes from viewpoints located in the caves. 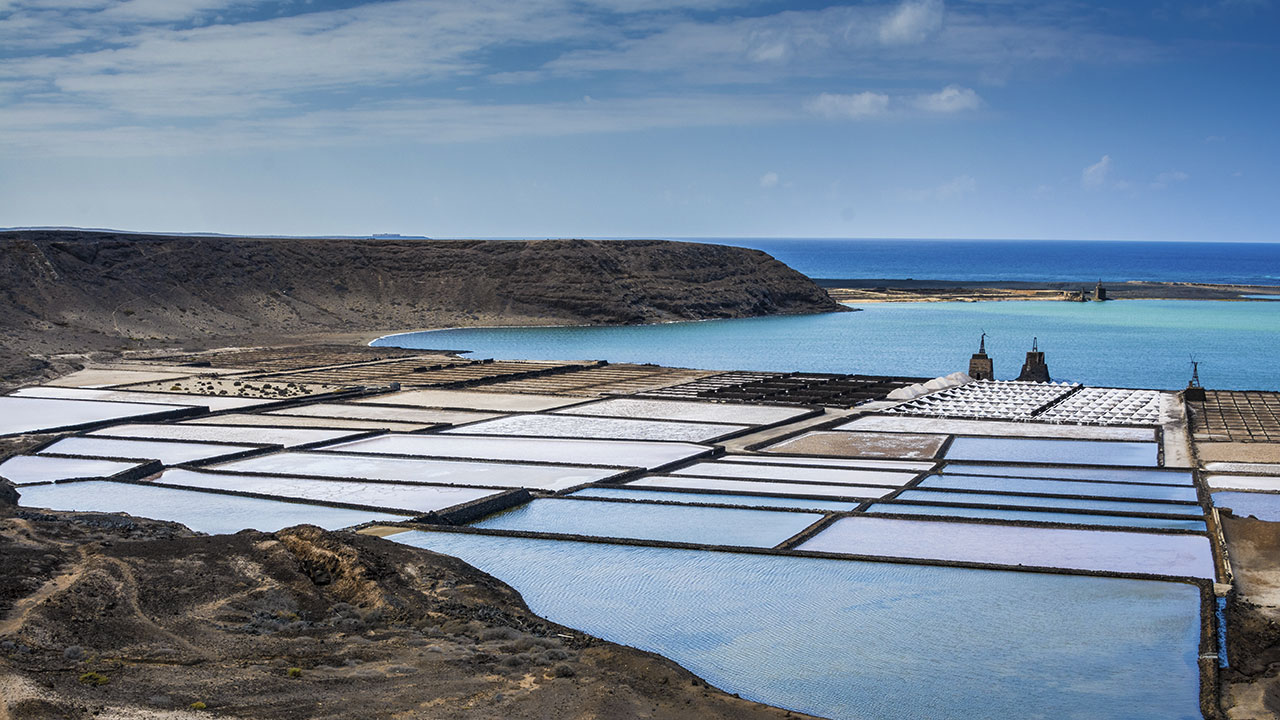 These are the largest salt mines remaining in operation in the Canaries. 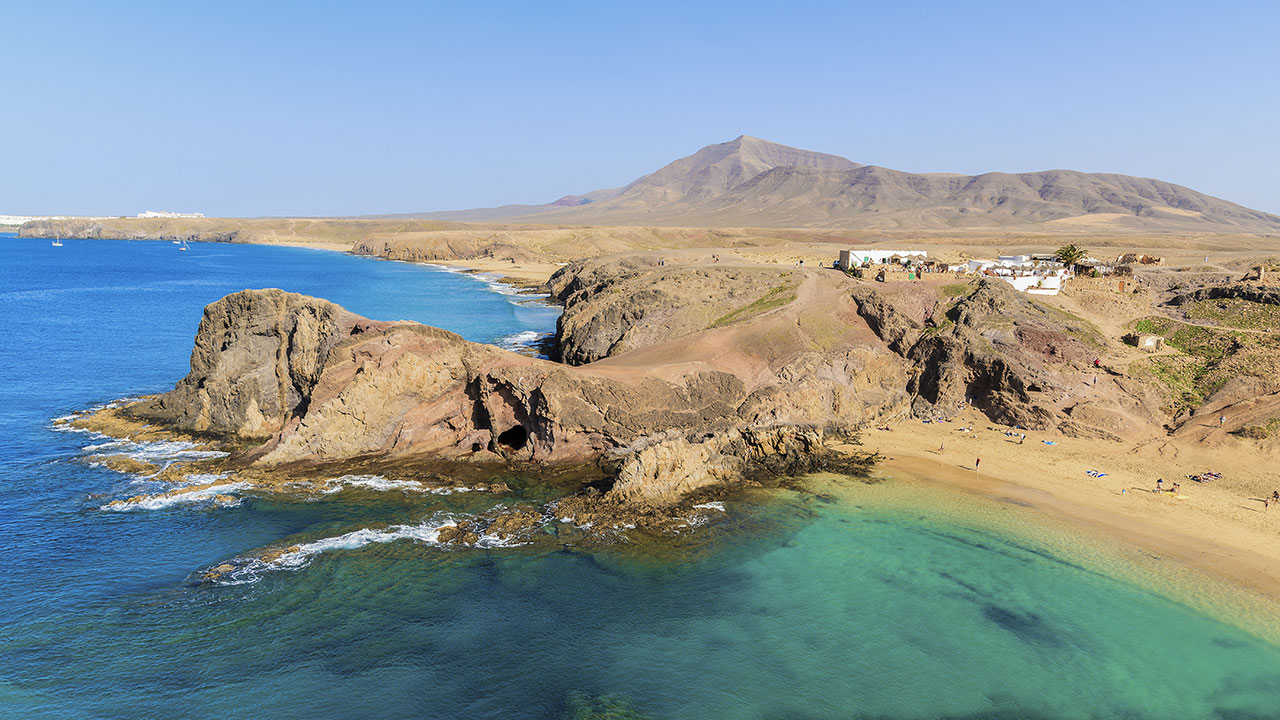 These are known for being the most beautiful beaches on the island. They are located in Los Ajaches Natural Park. The name comes from the multitude of colours in their golden sand coves with turquoise water and red and black volcanic rock walls.

There are five natural coves. To reach the beaches there are dirt tracks and two parking areas. There is one restaurant on Papagayo beach. 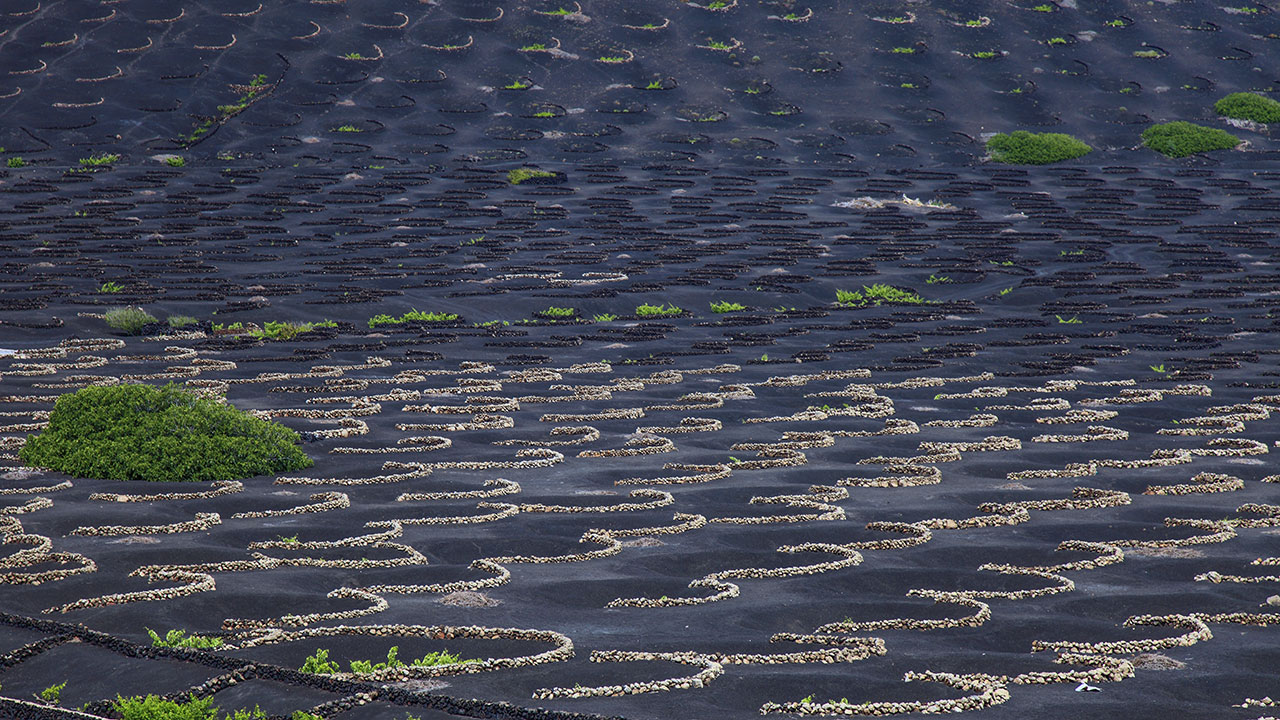 The volcanoes not only created landscapes after each eruption, but also in order to recover their lands, the islanders with creative ingenuity forged agricultural landscapes of great beauty which are unique in the world: The Protected Landscape of La Geria.

This area, where large quantities of grain were planted before the eruptions of the eighteenth century was completely burnt by volcanic ash projected from the volcanoes. The farmers discovered after a few months that where the ash covered the fertile soil the plants grew faster. This was a major discovery for farmers on Lanzarote. On an arid island, where it hardly ever rains, thanks to the layer of ash that absorbs moisture carried by the trade winds and rain water, the land was protected from the heat preventing the moisture from evaporating thus avoiding the need to water.

At present, Lanzarote boasts of eighteen wineries and is number one in the Canary Islands in wine production with certificate of origin. The Malvasia white wines are the specialty but other wines like moscatel, rose, red and sparkling are of good quality.

More and more wineries have committed to providing catering services for visitors to fully enjoy the flavours of the land.